This job is a major retouch job. As you can see, there has been very extensive damage to this photo. Damage through the centre now obscures some of the men in that area, and this damaged area is virtually lost and beyond repair. What had to happen was that a sliver through this area had to be chopped out, (digitally of course), and three of the men on the centre were unfortunately removed from the image. Extensive repairs were done around these areas to bring back some of the people at the front. As much of the original was retained, but a few people had to be ‘duplicated’ in order to place more people in areas where people were obscured in the original damaged areas. 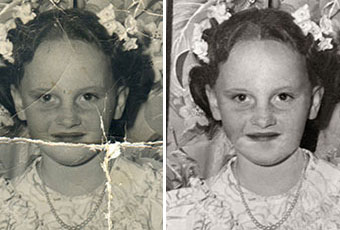 You have Successfully Subscribed!

By signing up, you agree to receive offers, promotions and other commercial messages from Digital Photo Restoration. You may unsubscribe at any time.